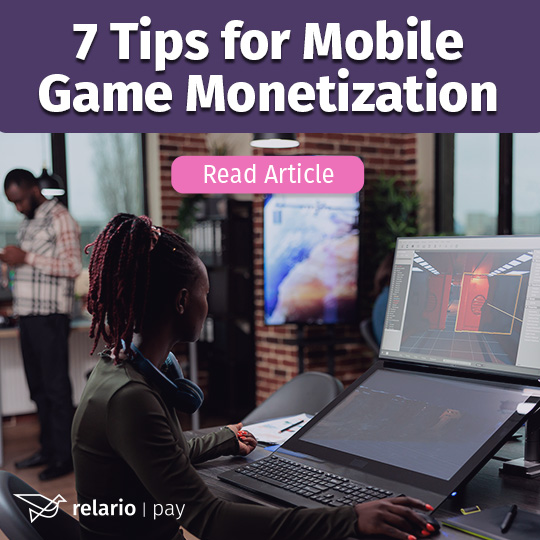 Posted at 08:09h in knowledge by Relario Pay

7 Tips for Mobile Game Monetization in 2022

So you’re a mobile game developer or growing your game publishing business and you find yourself wondering, what is the best way to monetize my mobile game? This article is for indie game developers who are starting their journey and want to learn more about monetizing their games and making it easier for the gamer to purchase in game add-ons.

Monetization can sometimes be seen as a contested topic among indie devs and small studios, due to it being viewed as a necessary evil to survive the ever growing jungle that is the modern mobile market. If you are trying to monetize your mobile game, you may need to penetrate a market that is less saturated. In Europe and North America – the competition is very high. You may consider to target Africa or India.

There are millions of people who would love to play your game, but did you know that many in Africa or India do not have access to credit cards or bank accounts? How do you capture them as paying customers? Also how do you monetize your game by 10X ? (Jump to Tip 2)

One of the greatest burdens an indie dev may suffer from is having to start from scratch with a monetization model.

Its best to see what other studios and developers have done before, so you can use their research and expertise to help guide your strategy. But where can you find it?

One of the best places is to hear from other game developers who want to share their findings by attending conferences such as Games Con taking place on August 24 – 28 in Cologne, Germany. As well you can learn from them on their YouTube channel.

You can find some very informative talks from bright minds in the industry, like Anthony Pecorella from Congregate. He delivers a deep dive into the core and meta game loops of idle games in his talk “idle games the mechanics and monetization of self playing games”.

Use services like Apptopia or Sensor Tower to find games in your category and then play the game. Pay special attention to where in the game the ads are placed.

So go to the app stores, go to Google, play, download the games that are most interesting to you, that are closest to how your game is modelled, and just see where they place the ads. It could be in stores, could be in game modes. It could be using banners. Really take a look at how they fine tune their economy and they’ll give you a good idea of how to use reward videos and various ad units in your games.

Now if you do not want to include ads in your games and are looking to monetize with in game purchases for tokens, credits, level advancement, add-ons for cars, characters, etc – you need to connect it to a billing or payment service.

The most common way for developers to receive payment is through Google Play Store or Apple store. This requires the gamer to enter their credit card information, bank account details into the app store.

There are 2 problems that arise with conventional payment methods:

There are millions of people who do not have access to bank accounts or have credit cards. How do you monetize your game if they can’t pay for the add-ons?

There has to be a better – simpler way.

Merchants have seen up to 10 times higher conversion rates with relario PAY’s simple 1-click checkout. The mobile user confidently sends a micropayment by regular SMS that is deducted at standard rates from their airtime.

The payment API integration is simple and easily to use and works with Unity, Android & iOS.

Tip number 3: Stick to your genre.

Now that you have several games, devs and studios as role models, you may have  another problem to tackle. There are too many paths you can take to reach your goal.

This is something you can easily solve by having the right strategy to filter your information. One of the best ways to filter is to start with what works for your genre and model your game after that. Find other games that are like your game and study their monetization strategies and trends.

Some devs may find they’re valuable users are those who spend time and or money on a game in games with long play sessions and add-on game purchase. While others may find them in short play sessions with advertisements shown in the transitions between segments of gameplay or user interfaces and games. It may all depend on the genre.

Monetizing hyper-casual games is about monetizing at the start of the gameplay because you don’t expect users to stick around for very long.

Publishers with hyper casual titles will often use many different types of ads to show them at the very start of the user journey. So for casual games, we don’t expect users stick around for very long because the games themselves are typically not super deep. So, for hyper casual games with ads, we typically see developers using banners, native ads at the very start of the user journey. As discussed in tip 2 – be sure to make it easy to include an in-app purchase using a seamless payment solution provided by relario PAY.

Tip number 4: Be ready to teach.

Despite our first 3 tips, every game is unique. You must iterate and test every option available, even if it’s just in concept. Sometimes you’ll find what works best for you is contrary to what is trending in your genre. It’s possible your genre and audience research shows that your users are not usually familiar with a monetization model you decide to adopt.

You need to teach players this new system and show them how to move around your games. This is especially true when it comes to new seamless payment methods such as sending an SMS to get access to in-game tokens, credits, or add-ons. Be sure to provide an on-boarding slide that demonstrates how the user can make a payment.

Though not mentioned much after a game is released, user experience is probably the most important aspect of a video games design when it comes to engaging with an audience through a dedicated process of UX design.

The first time user experience will teach the player how to play the game and where to look for advancements.

Looking at both ends of the spectrum, you can either design monetization as a series of paywalls to access your game fully or design it as a cool bonus for those who spend their money in your game. As a player, you want to feel like you’re not forced to spend to pursue your goals.

As a game designer, you want to keep players from stepping away from your game in disgust. Try to set this goal above everything else when you design your games, players should be able to play all the way to the end game without spending.

There is no better way to disenfranchise a user base than to make it pay to win. It’s just not fun. User experience is key and creating boundaries that force players to pay will ultimately punish your most engaged users.  As people progress through the game, you want to give harder tasks and make it a little bit more difficult for them. But to make it to the point where they have to pay to progress is going to kill your most engaged users.

Tip 6: Strategize from day one.

Badly implemented monetization can lead to negative player experiences. According to Unity, the best performing ad units are deeply integrated with the app UX. The same goes for in-app purchases that provide a seamless payment solution.

But what to sell?  Which ads to implement and the monetization strategy must be built into your mobile game from day one as part of your natural core game loop. Early on, make investments into analytics, plan ahead and figure out how you’re going to understand your users. Analytics help you to make data driven decisions. With that data, you’ll be able to create a monetization strategy that fits with their wants and needs.

When starting out with monetization.

First, determine your goal with ads. Do you want to monetize your user base? Increase retention?  From there, start small and measure the impact of including ads in your game and keep testing.

The user base isn’t just one type, so ads may work for some of your players, but not others. Keep testing and trying to improve the user experience.

Tip 7: Maintain a balance between creativity and monetization.

Spending time designing the monetization model for a game can seem separate from the creative aspects. You may think that releasing a game and selling a lot is the meaning of success, but there’s more to it. By shifting your viewpoint of success, you’ll ensure a much more stable life cycle for your game. For starters, better art and gameplay will help you drive engagement further.

You may want to try and use apps that help you keep checks on the time you dedicate to each task. One great task manager app that many members of the app’s game dev community talk about is Trello. Trello works more like a digital corkboard where you can create things like notes, tasks, checklists, reminders and references and organize and manage them in your way. Used efficiently Trello can help you manage priorities, avoid scope creep and keep track of time spent.

The closer you are to your goals, the more room you have to be creative. At the end of the day, monetization is about making sure the servers stay on. So if you’re far from your goals, tackle the low-hanging fruit. This will depend on your game design and your own personal goals. There’s a fine balance between your business goals and being creative with it. Essentially you want to make the process of game play and add-on payment purchases seamless.