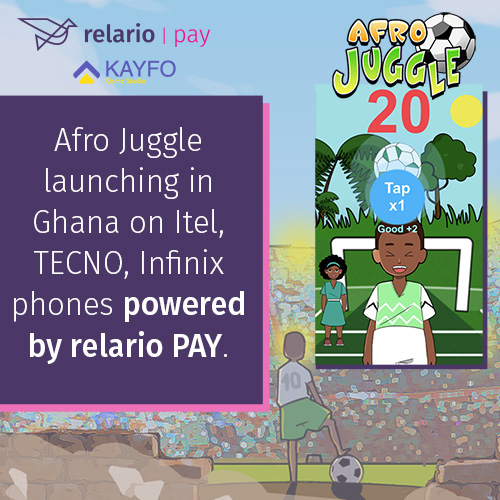 About the Mobile Game

AfroJuggle is a game of reflex where the gamer plays Moussa, a young football player who wants to go pro.

The longer the gamer is able to juggle the ball, the more Moussa will play in professional stadiums and in front of a bigger public. The player can also choose a country and become the champion of the greatest African tournament!

With AfroJuggle the gamer will:

Using relario PAY seamless payment technology with AfroJuggle, the gamer can unlock in-game purchases such as jerseys, stylish balls and other accessories. Payments are sent through SMS and uses the user’s mobile airtime to make purchases.

No credit cards. No bank accounts. The payment solution is a game changer for merchants providing more payment conversions than conventional payments.

One easy-to-integrate API provides a seamless payment gateway for game developers and publishers on Airtel and MTN networks across Africa.

Kayfo is a video game studio based in Dakar (Senegal), whose main mission is to produce mobile games for an African audience. Founded and led by a Ubisoft alumni, the studio has recently joined forces with 9 other studios spread across the continent (the Pan Africa Gaming Group), with a common goal of taking the gaming industry to the next level on the continent!

Relario AG, a fintech company based in Switzerland, is transforming how payments are made for mobile gaming and digital content in over 100 countries and 300+ mobile networks with one easy-to-integrate API. Relario PAY has successful partnerships with some of the world’s leading Game Publishers, mobile network operators, and OEM manufacturers.

We use cookies and other tracking technologies to improve your experience on our website.OkLearn more